JD: DEFINITELY not a Greenneck 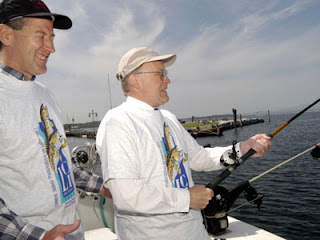 Predictably, Guvnor Douglas is onboard the gas-price gouging train and is ringing the bell to beat the band. Predictably, he’s decrying high prices, and calling on the feds to bring to bear their mighty powers and reign in the free market. Predictably, he’s been almost silent on the subject of conservation. Predictably, he hasn’t got a goddamn clue.

Today, the EIA released its weekly gasoline inventories report. The result? We have record low inventories for this time of year (in the parlance of the report, “well below the lower end of the average range”), facing off against record high demand. Hey, Guv: There’s this thing. It’s called “supply and demand.” Ever heard of it?

What we need is sensible energy policy that uses financial incentives to encourage conservation. What we need is a state gas tax (at least an additional $1/gallon; $2 would be better) that’s offset by an income tax rebate based on a predetermined cap on gasoline use.

Exemptions would be made for those whose job truly requires the use of heavy, fuel-inefficient equipment. Exemptions would NOT be made to the soccer mom who NEEDS her SUV because a Honda Civic is just so…so… inconvenient.

Here’s the thing: One way or another, we’re gonna see higher gas prices. We can do it in a way that makes sense, minimizes the pain, and prepares us for a transition to a post-carbon economy. Or we can do it in the kicking, screaming, dragged-by-the-frayed cuffs-of-our-Carhartts manner that our current political elite seem to prefer.
Posted by ben at 3:40 PM 1 comment:

What happens in Basra, stays in Basra

Free marketing tip of the day ... drop the word "Iraq" from all marketing collateral.

Thanks to the kindness of an old client (and the timely pregnancy of his wife), I had the good fortune to spend the last week in and around Reykyavik, Iceland.

It's an incredible place, surrounded by an unrelenting and spectacular landscape that might only be described as an ice-age Wyoming.

As harsh as that might sound , the single emotion that came back in my luggage from Iceland with me was none other than jealousy.

This small little country, a place where sheep outnumber people 4 to 1, can only be admired and emulated. Icelanders produce 75% of their own energy thanks to the massive geothermal boiler that they sit on, yet at the same time they are remarkably thrifty with the resources they have. Without a doubt, this reluctance to piss away an energy boom is the effect that Iceland's brutal environment has had on generation after generation.

Somebody once said that the key to energy independence is understanding the difference between "wants versus needs." In my mind, there's no doubt that Icelanders understand this philosophical balance better than anyone.
Posted by Drew at 1:47 PM No comments:

Irony. Not the funny kind. 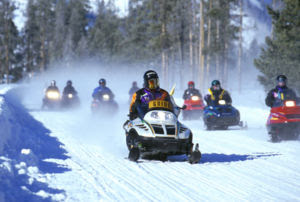 The Greenneck particularly appreciates this pearl of wisdom from the head of VAST:

"Some of our most hard-pressed economic areas that have no other ability to offer jobs are losing great amounts of jobs because of a lack of winter-time tourism."

The whole sordid tale can be found here.
Posted by ben at 8:07 AM No comments:

Last week, literally dozens of people from coast to coast donned their helmets and threw a leg in honor of Bike to Work Day. I watched a few of our own locals participating in the alleged nationwide movement, sheepishly waving to their friends that drove by and honked, and digging deep to find the speck of pride that the day is supposed to provide.

For the majority of new participants -- excluding the shprocketwonk population (ie, anyone who knows what Swobo is) -- Bike to Work Day is not a liberating experience. It blows. It's humiliating. And the reason that it sucks and blows and is humiliating is that the vast majority of bike routes and bike friendly facilities in the United States are a woefully inadequate and barely usable piece of crap.

On paper, Bike to Work Day is a no-brainer. We market the event, we draw new bicycle commuters into the population, global warming shall bow down before us, and we toast our energy independence with a hearty slap on the back.

The reality is much less kind. While the veteran bikearazzi enjoy the thrill of riding with traffic, new bike commuters are acutely aware of the true dangersof bike commuting. They feel exposed on non-existent shoulders, as they should. They recognize that drivers care little about knocking them into the ditch, as they should. And they quickly realize that their local government cares even less ... a sad state of affairs, particularly in our own "outdoor friendly" communities.

The largest tragedy of all is that when (and if) a first-time Bike to Work Day commuter makes it home, they've probably had a conversation with themselves about the wisdom of being used as a traffic slowing device by their local DOT ... "Was it really such a good idea? Maybe doing this bike thing once a year is plenty."
Posted by Drew at 11:40 AM

Email ThisBlogThis!Share to TwitterShare to FacebookShare to Pinterest
Labels: BIKE TO WORK DAY 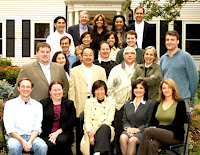 His mission? To study how rapid globalization influences illegal markets for natural resources at home and abroad. Yeah, brah!

A pre-season favorite, California, will have to wait a little longer for their first win of the series.

This bold program not only caps carbon emissions for each of 10 states in the deal (yeah, Vermont), but it also sets up a verrry interesting system for carbon offsets. States can't just buy a sticker pack from Native Energy or Carbon Fund, they've got to do their own dirty work to get credit ... either through the capture of landfill gas, plugging sulfur hexafluoride leaks, planting mo' trees, reducing methane from manure, or buffing out their buildings' energy efficiency. And if they come out ahead in their number of offsets ... they can $ell them.

Meanwhile, in the rest of the country, the big story remains that global warming is bad for puppies.
Posted by Drew at 9:32 AM No comments:

A lifetime (or a little less)

From the "how to lose friends and alienate customers" school of business...
Posted by ben at 11:52 AM No comments:

Email ThisBlogThis!Share to TwitterShare to FacebookShare to Pinterest
Labels: Killington

The Greenneck did not see Bill McKibben speak last night. Billy was just down the road from the Greenneck’s pad, and yet…

It’s not just because the Greenneck didn’t think much of McKibben’s latest work, which felt a little hollow and cobbled together, even if the overall message resonated. It’s not because the Greenneck couldn’t spare the time; hell, the dishes were done and the boys drooling onto their pillows by the time MC Kibben took his seat.

So why didn’t he go? Maybe it’s because there’s something in Bill McKibben’s style that leaves the Greenneck a little cold. It’s not as if he doesn’t agree with much of what the man says. But there’s something a little too… the Greenneck struggles with the right word… (is it intellectual?) about Bill McKibben. It’s not the stuffiness of Gore; it’s softer than that. And it’s not sanctimony; McKibben’s too smart to go that route. Perhaps the Greenneck is simply intimidated by McKibben; perhaps he’s just jealous of the man’s commercial success, which has come without selling his morals south.

Or maybe it’s this. Maybe the Greenneck is weary of the same tired scene: An audience of good, virtuous, Subaru-driving, like-minded folk sitting rapt as the enviroapostle of the evening lays it on. These are good people, and the message is usually spot-on. But it’s the same preacher and the same choir and the same damn sermon every time.

The Greenneck has no answers, at least not right now. And he really needs to go: Fresh Air is on, and Terri Gross is interviewing Alice Cooper.
Posted by ben at 3:20 PM 3 comments: 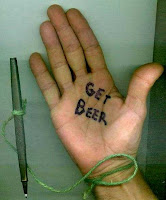 Obama gets a wicked bump in Red Sox nation with the announcement that his ancestors are ... yes ... irish

You can't make this shit up.LINK
Posted by Drew at 9:40 AM No comments:

Just Don't Do It

Grace Potter reminds us all that today is Don't Pump Gas Day.
Posted by Drew at 9:33 AM No comments: 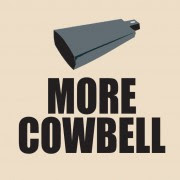 Christopher Walken declares his candidacy for the White House.

More Cowbell
That scene in Pulp Fiction
On the Simpsons
Best of SNL
Posted by Drew at 6:48 AM 1 comment:

Email ThisBlogThis!Share to TwitterShare to FacebookShare to Pinterest
Labels: Walken Stowe Secessionist
Posted by Drew at 10:27 AM No comments: 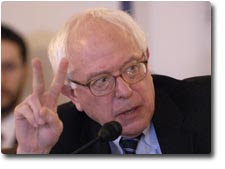 The Greenneck considers himself a Bernie supporter. So pugnacious, so pragmatic, such obvious disdain for hair care products. These are qualities the Greenneck can identify with.

But Bernie seems confused of late. So confused, he’s calling for a windfall profits tax on big oil and the return of cheap gas. Let’s be clear: The Greenneck feels the pinch of $3 gas, and he feels for his fellow Vermonters, many of whom can afford it even less than he. And he can hardly comprehend the quantity of money that’s falling into big oil’s pockets. All those zero’s. (It reminds the Greenneck of last week, when he hopped on his neighbor's 2-stroke KTM 200 and did zero to 60 in about three point zero seconds).

The Greenneck is not a big thinker. But if he were, he’d think that a return of inexpensive gas is the last thing Vermont needs. If he were, he’d think that Bernie is merely pandering to his constituents. And he’d think that if Bernie could muster even a fraction of the courage he’s shown in the past, he’d be calling for higher energy prices and perhaps even a tax on gasoline to encourage conservation. The Greenneck wonders if such a tax could not be offset by cuts to payroll taxes, or by an income tax credit based on a carbon consumption cap.

But then, the Greenneck is just a simple kind of man; now, his head hurts from so much thinking and wondering. He needs a tall boy and a nap.
Posted by ben at 2:49 PM No comments:

They both start with "G" 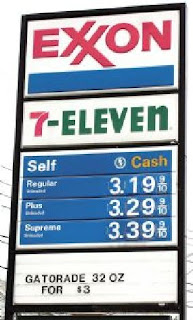 The Greenneck does not bemoan the price of gas. 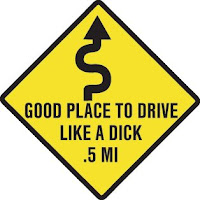 May 3 is Give Another Motorist The Finger Day

May 14 is Worry About Your Car Payment Day

May 18 is Blow Off Bike-To-Work Day Because You're Planning to Bike To Work Next Week Day
Posted by Drew at 9:20 AM 2 comments: 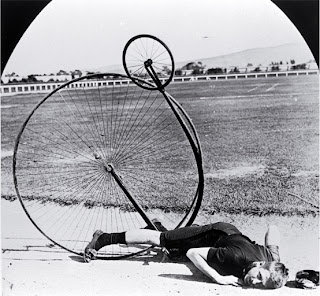 I rode my bicycle today. It felt damn good, despite the fact that as of this morning, I weighed 185-pounds, a solid 15-pounds more than the good ole days, when I prowled the top-half of the semi-pro category on my mountain bike (that would be the top half of the bottom half, if you’re interested in semantics. I’m above such details, myself).

So I’m getting fat. Thank goodness our tractor runs on diesel.
Posted by ben at 3:52 PM 1 comment: