How big was the Mad River during Hurricane Irene? 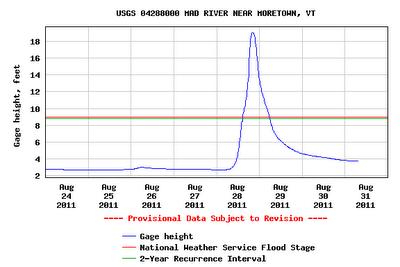 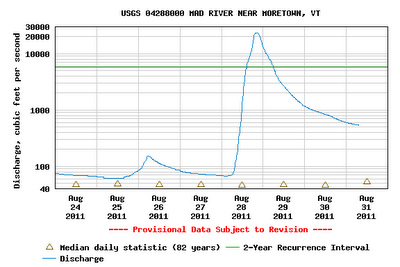 The day before Irene hit, the Mad River was trickling through the Moretown measuring station at a little less than 100 cfs, at a river height of 3 feet. 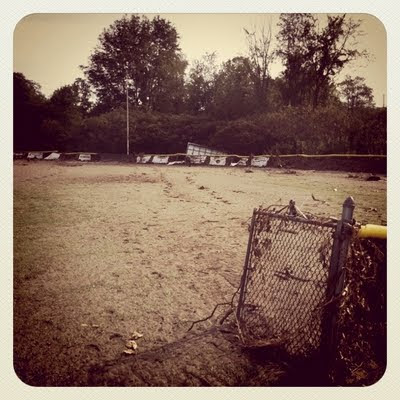 It's dirty around here. The drying river mud has blanketed the green playing fields and farmlands of the lower part of the valley. With a little bit of wind, the fine silt starts blowing around and gets in your eyes and teeth.

The short-term reality is still quite stark. The Dumpsters are full at Bridge Street, which has slowed work progress down considerably. It's unclear whether the issue has to do with who's paying for the things, whether there are not enough trucks to haul the containers away, or whether they can't find a place to put the stuff.

But, oh, the piles are still there .... neatly segmented piles of shattered drywall, soggy insulation, windows and glass, nail-filled lumber, and mud and other unidentifiable substances.

Crews are still at it though, as the race against mildew has begun. Ripping up floorboards and pulling down walls is just part of the game. Giant dehumidifiers is the other part, if you're lucky enough to have gotten your hands on one before they got scooped up. 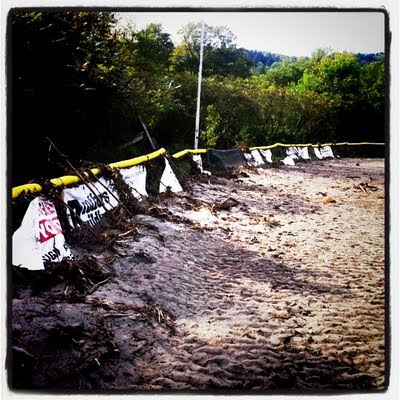 Locally, the organization is hitting its stride. The desk outside the library has blossomed into a Facebook Events page that points people where to go on a daily basis (ie, today it's Simple Steps Farm and the Church of the Crucified One.)

A bit further away, though, the towns of Granville and Rochester are apparently in dire straits. Both towns are cut off from vehicle traffic, and still have no power or water. Apparently, someone hiked out of Rochester yesterday until they found a cell phone signal and called for help. Somehow they got patched through to the guys at the Fish & Wildlife Dept, who sent a team on ATVs down immediately to assess the situation.

Volunteers this morning were gathering groceries to bring down to the Rochester/Granville area, and a clothing drive has also been started to gather up wearables (all sizes) for those who've lost everything.

Cleaning up after Irene 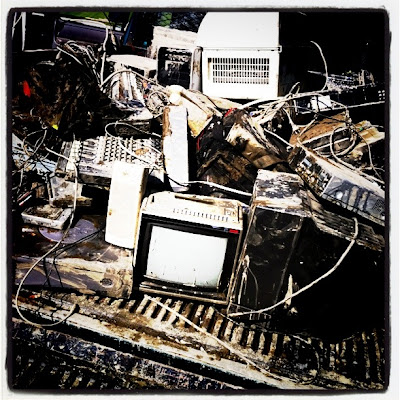 Turns out, a Shop Vac doesn't really do the trick.

Standing in a retail showroom ... probably as big as half a tennis court ... with an inch of slick and slippery river mud everywhere, the only thing you could really do was start shoveling the stuff into buckets. Sort of like trying to get that last spoonful of milk out of the bottom of your cereal bowl. The bucket would then go to a wheelbarrow, which would then get dumped on the far side of the street. That was the mud pile.

There were other piles, too: the electronics pile, the carpet pile, the furniture pile, the tree and branches pile. There were piles at the front of buildings, at the back of the buildings, on the decks, and in the road. And when the mega Dumpsters got there, the piles were moved in there, handful by wet handful. 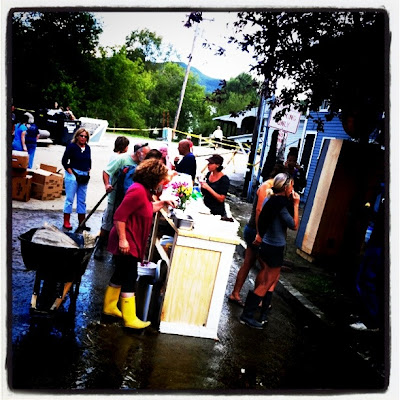 That was yesterday. A day all about wetness. Volunteers were abundant, and organization was really quite strong. At the entrance to the Bridge Street area, a table was set up giving people ideas where to go ("People needed at: Flatbread, Ch. 44 ...etc".

Today, on the other hand, the cleanup battle is more about the (relatively) dry stuff. Peeling off drywall down to the studs, jerking out handfuls of wet fiberglass insulation, and racing against the clock to keep the mildew from setting. The mud is now caked-on dirt, like a low-grade cement jammed into every crevice.

There are still plenty of volunteers, but it's far far less than yesterday. And undoubtedly, tomorrow's roster of free laborers will be even smaller. By later this week, volunteers will have returned to their day jobs, and people will likely be on their own.

One of the houses we worked at yesterday had four feet of water in the downstairs kids' rooms. "Just get the pictures," said Susie Lowe to the guys who were handing out the mattresses, clothing and toys. "That's really all I care about." 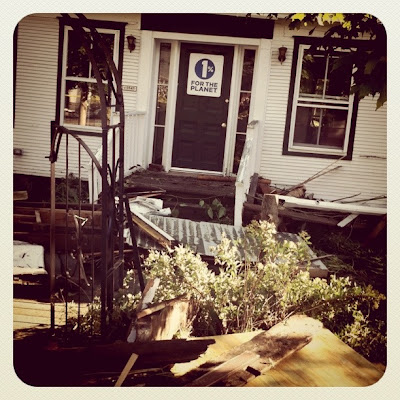 Five noteworthy restaurants in the area were knocked on their asses by the storm. The Green Cup and Mint in Waitsfield are very likely a total loss. Warren's Pitcher Inn basement was severely flooded, and the iconic American Flatbread is a giant mess at the moment (though I have heard the eating area itself is generally OK). Up in Waterbury, the word is that the Alchemist and their brewing facility is completely destroyed.

Lower on the list from the homes and farms and businesses affected by the storm are the other things, like Couples Field in Waitsfield. The home of the local Little League and soccer fields, Couples Field is under three or four feet of river mud, the baseball backstops have been folded like an accordion, and the new dugouts from a few years ago are now far downstream as part of the Lake Champlain watershed.

And, of course, that's just the start of the list. Places like Moretown are completely cut off, with bridges to the north and south completely gone. Granville and Rochester are now islands as well, without power and groceries. I don't know what's up in Bristol, Lincoln, Richmond and Huntington, but I'm sure it's similar.

A local musicfest slated for October 8 has changed their theme from general fun-hogging to a benefit for local businesses. The upcoming ultimate tournament is doing the same. Many others are looking at community fundraising events, and the agency that's likely to be the grant giving agency is the Mad River Community Fund.

As a 501(c)(3) organization, all donations to the Community Fund are tax deductible. Much like the Conservation Alliance, they operate with almost zero overhead so the money can go right where it needs to go. They're good folks, and they take PayPal.

If you feel the urge to help out, this would be a great place to start.

DONATE: Mad River Community Fund
Posted by Drew at 11:01 AM No comments: 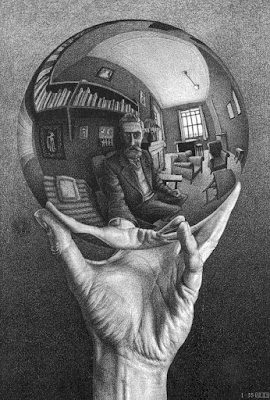 The facts are pretty simple.

At 455,000 sq ft, Outdoor Retailer Summer Market is 32nd largest trade show in the country, bringing in about 18,000 people twice a year to a city that houses only 185,000 people. The show is vibrant and crowded to the tune of $40 million in local spending a year, allegedly recession proof, and apparently more fertile than the OctoMom for standup paddleboard companies.

The attendees are, for the most part, generally pleased by SLC as venue because of its small city feel and access to outdoor recreation. And Outdoor Retailer -- or, rather, their parent company at Nielsen -- has signed a contract with Salt Lake City to host the show in Utah through 2014.

But beyond that? The crystal ball is getting fuzzy.

OR director Kenji Haroutunian was strikingly direct in the show's daily newspaper (LINK, p17), serving notice to the Beehive State that a contract beyond 2014 was certainly not a sure thing. "We're pushing the envelope with what Salt Lake City can provide as a venue, as far as hotels, taxis and restaurants," said Kenji in the interview. " Salt Lake City has arguably a tier-one size of a hall, but it is a tier-two or even tier-three size city to accomodate the show."

It's difficult to say whether it's all just saber rattling in advance of budget negotiations, or if the show is indeed placing pressure on SLC to build a publicly financed convention center hotel that can house attendees closer to the event, instead of relegating overflow to rooms at the airport Comfort Inn and beloved oddities like the Carlton.

Of course, as SLC and OR head to the bargaining table, the additional spice of politics is poised to flavor those talks as well.

Too much pepper? You be the judge.

"The governor has made it clear that extractive industries are a critical economic industry in Utah. However, tourists do not fly to Utah from all over the world to visit the American equivalent of the Saudi Arabia oil fields. They come to Utah to ski, hike, camp, paddle, hunt and fish in pristine and inviting waters and landscapes. And while they play, they fill hotels, lodges, restaurants and souvenir shops."

Utah is also ground zero for the Tim DeChristopher saga ... the emerging national story of an environmental advocate who was sentenced last month to two years in prison for a peaceful but disruptive protest.

And apparently people are taking notice of that as well. 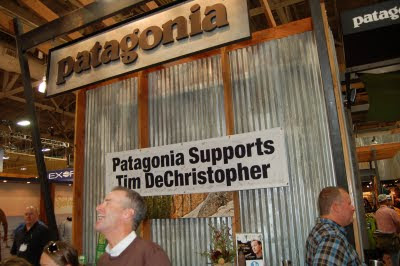 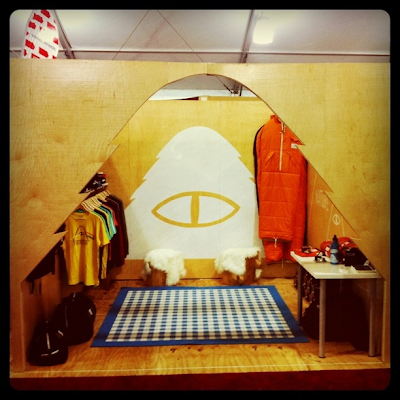 Jammed into a log cabiny 10x10 in the New Product Pavilion ... the crew at Poler drew the eyes of merino wool hipsters, noteworthy outdoor product designers and the usual shwag trollers like myself.

Based in Portland, Oregon, Poler's outdoor equation seems to be one part heritage, one part skate, and one part shaggy Oregon bearded dudes. If you're looking for a snowsports parallel, Poler might be the Spacecraft of the outdoor world.

New items in their booth (that aren't on their website yet) included reusable handwarmers, canvas daypacks, and a sleeveless sleeping bag that looks ideal for lingering around a Deschutes River campfire. 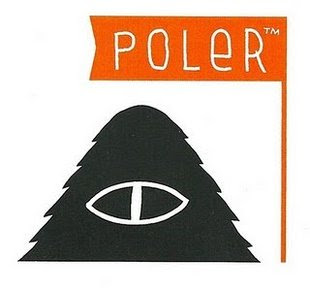 Email ThisBlogThis!Share to TwitterShare to FacebookShare to Pinterest
Labels: Best of Outdoor Retailer 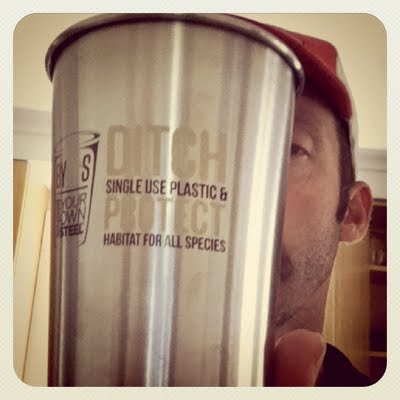 Two epic lines wound around the Patagonia booth for the giveaway, with a $5 donation going to Yvon's cause du jour. All for a relatively simple thing: stainless steel keg cups, tagged with the phrase of "Ditch Single Use Plastic & Protect Habitat for All Species."

The things were clearly the red hot shwag of the show, as texts and phone calls were being made from the line ("yes, the Patagonia booth, NOW"), and there was a pure and unadulterated sense of stoke from folks as they made it to the front of the line before supplies ran out.

I walked away with two of my own cups.

Getting conventioneers (and frat boys) to ditch plastic cups for a $19.95 steel pint glass isn't exactly going to put and end to malnourishment and water pollution in developing countries. It's not going to permanently shift our over-consuming culture into a lower more sustainable gear. And it's certainly not going to halt the onslaught of climate change, and preserve critical habitat areas.

Email ThisBlogThis!Share to TwitterShare to FacebookShare to Pinterest
Labels: Best of OR, Best of Outdoor Retailer, Patagonia


File this one away under "Parties I Wish I'd Thrown."

The crew at Teva brought in the Spazmatics for a "Totally Teva 80s Party." And while the band fully delivered their share of entertaining moments, the willing crowd added the rest.

The video was shot on my iPhone, but if you go full-screen it's definitely worthwhile.