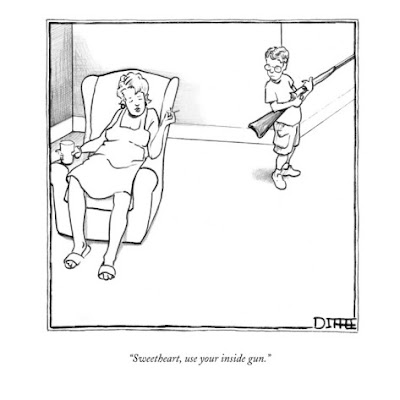 Next Friday, it will be six months since the Sandy Hook Elementary School shooting.

In that same half year, close to 5,000 people in the United States were killed by guns; Congress and various talking heads spent thousands of hours grandstanding on all sides of a gun bill before burying it at sea, and State governments – like the one led by Vermont Governor Peter Shumlin -- joined the kicking-the-can-down-the-road party by saying his hands were tied against meaningful gun legislation unless the Feds did something first.

Even our gridlock has gridlock, and the gun conversation has added another cup of sand into the grinding gears.

On the bright side, both sides have shown an incredible talent for yelling down empty hallways and looking down their nose at people whose gas tanks are on the wrong side of the car.

Personally, I like a lot of what Dan Baum has to say.  I first read his thoughts in a lengthy WSJ piece published right after the Newtown tragedy, and just read a follow up "debate" in the NYT from last month.  Thought provoking and idea rich … you should check him out. 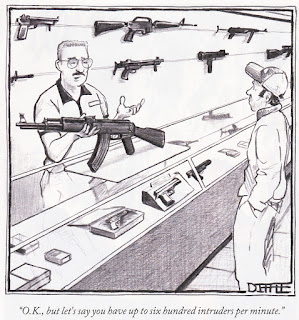 WSJ:  Why our gun debate is off target
NYT:  What gun lovers think
Dan’s thoughts span a big range, from voluntary actions by gun retailers to setting the table for a Firearm Responsibility Act which would make gun owners criminally liable for unsecured weapons. But mainly he’s trying to stake out a rational tree of trust where all sides are welcome, and ideas can actually be discussed.

There are close to 300 million guns in the United States.  Even if another gun was never made or sold, we still need to figure out how to live together.


Everything else is just killing time.
Posted by Drew at 10:35 AM No comments: