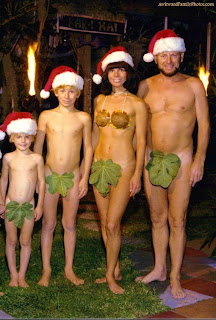 Ideal for mid-season rollouts of personal lifestyle choices, increasing sell-in and sell-through of emerging relationship issues, and elevating personal brand awareness in a crowded and competitive “red ocean” marketplace, this cutting-edge package of familial communication services spans the range of traditional public relations and new media tactics, bringing the best of old and new side by side. Like that time when Grandpa took me with him to show him how to use the ATM.

“PR starts at home. Trust me, I know,” said Drew Simmons, Pale Morning Media founder and president. “The essential PR skill set of identifying an audience, crafting a message, then delivering that message is one that is often overlooked in a holiday environment. By investing in a professional communication firm now, you can save yourself – and your personal brand – significant costs down the road.”

* Media relations: Maximize the mileage of critically newsworthy items from your personal and professional life. Scored three goals during the company coed broomball outing? Drove to work with the fuel light on, the entire way? I smell a press release! 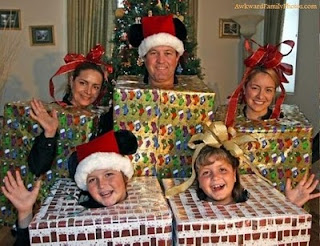 * Spokesperson duties: As the spotlight of Christmas Dinner can shine a bit too bright for some of our clients, we now offer spokesperson duties to embrace your single chance to make up for last year’s poorly chosen words. Our veteran mouthpieces, with more than six decades of combined dinner party wine-drinking experience, will deliver a memorable, brand-consistent and effective toast on your behalf. You won’t even need to be there, but you’ll want to be.

* Event hosting: Be the hero you always wanted to be by hosting a seemingly spontaneous post-holiday event. Our professional event hosting experience reinforces your “living for the moment” brand mantra through a detail-driven process that leaves no stone unturned. We also maximize attendance at family-friendly events by developing invitation tiers of A-list, B-list and LFC-list targetsd. Previously successful events include the “Boxing Day Bloody Mary Massacre” and the “Sledneck All-ages Backhill Powder-tow-in Fest.”

* Social media management: Our experienced social media technicians will help you post an unforgtettable series of meticulously crafted, thought-provoking, whimsical and occasionally poignant status updates throughout the holiday season. As I think you’ll agree, spontaneity is an art.

For more information, or to send an instant deposit via PayPal, please send a message to wickedoutdoorsyATgmail.com.

What will 'Man-ta' bring you this holiday season?

We all know that the holiday season is a time of giving. (See also: "Better to give than receive," "it's the thought that counts", "a kick in the shins is better than a poke in the eye").

But we also know that while we're out there nailing down gifts for the important (wife, kids), the essential (clients, business partners) and the nearly impossible (sorry mom), there comes a time in every man's December when he needs to slap down that credit card .... for himself.

In other words, what Santa is to the rest of my shopping list, Man-ta is to me.

Man-ta is the one who will be dropping a new cordless drill on my workbench this year, and who will also refresh my bar with some 15 year single malt. Man-ta is my anonymous Kwanza, my stealth Chanukah, and my elusive elf. I love Man-ta.

The third rule? Keep the receipts to yourself. 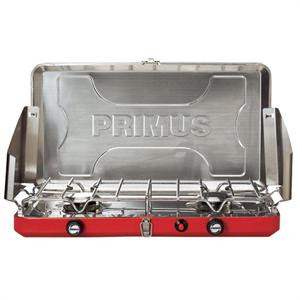 I've hammered mine. And it still rocks.

The Saturday after Thanksgiving, we did a winter outdoor barbecue for about 40 people ... and while my standard propane BBQ grill couldn't stay lit in the wind and cold temperature, the Primus Atle double burner rig was perfect for hot dogs and cider.

Practically nuclear, it's guaranteed to impress your friends and awe your children.

Man-ta idea #2: Get red instead

You've got a couple holiday parties on your calendar, I know you do. I also know that while you've got 4 softshells and a couple down sweaters in your closet, you don't know whether or not you have a clean white button-up shirt that still fits you. 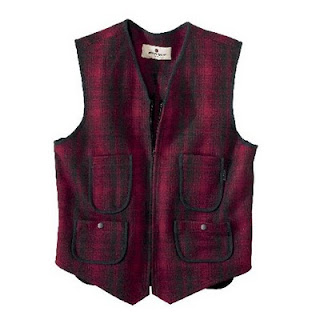 Your options for holiday party attire are limited. You could go the ugly sweater route (#42 on "things white people like"). You could trot out your wedding suit ("well honey, at least the jacket still fits"). Or you could not dress up at all (lame).

Man-ta's idea is simple. Pick up one of Woolrich's red-plaid railroad vests. It's amazing priced at $69. It looks simultaneously classy and rugged. And it's something you'll actually wear for the rest of this winter, as well as the next one.

The thick wool makes for a killer master-electrician-style vest, suitable for indoor and outdoor work, with four wide-mouth pockets that fit everything from drywall screws to a cell phone... a total Man-ta must.

You're not going to leave a stash of Kindles in the bathroom at work, and you're not going to nail your laptop to the wall above your toolbench. You're going to get a subscription to a real ski magazine, because that's what guys do. 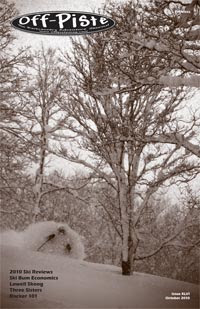 Ski magazine aren't breaking news or high tech publishing breakthroughs, nor are they supposed to be. Instead, they're a letter (handwritten, of course) from last winter, inviting you to enjoy the coming one. Here are a few of the best.

Backcountry ... I keep thinking they've mastered the art of the backcountry ski mag, but they keep raising the bar. LINK

Powder ... Such a classic, they could send me back issues instead of new ones and I'd still be happy. LINK

Skier ... Truly original. The funniest of them all. Les is More. LINK

Off Piste ... The original northwest 'zine and a true labor of love. In case you're not aware of it, the tradition is to send extra cash with your subscription check. LINK 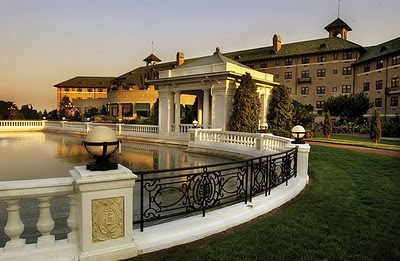 The Hershey Hotel, where I spent the last week at a sales meeting for one my clients, is a grand affair.

Built during the Great Depression, the architecture was imported from an Egyptian hotel which Milton S. Hershey stayed at during a trip in the 1920s. The result is impressive: a little bit Gatsby, a little bit Indiana Jones, and a lot bit Willy Wonka.

Hershey was a late-life success story who pioneered adding milk to caramel as a preservative, and who built an incredible fortune by doing so. Not content to be merely rich, Hershey was a model philanthropist.

Hershey pledged there would be no unemployment -– at all -– in his town during the Great Depression, and backed up his words by building hotels and theaters and banks and schools and everything else. He even paid workers to build row houses, and then sold the very same homes back to the workers. At cost.

Milton and his wife Catherine had no children, but founded a school for wayward boys in 1905. Today, the Hershey Foundation oversees that school, providing a completely free education (including room, board, clothing and food) to underprivileged youth. If the students can maintain a B average through graduation, they get $80k of their college paid for too. The school's endowment, managed from the original donation of $60 million provided over 100 years ago, is now well over $7 billion. 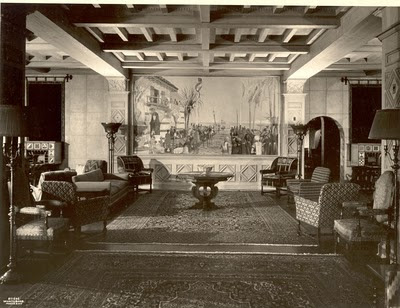 In his eponymous hotel, a towering mural hangs behind the grand Iberian bar, portraying a bustling Egyptian boat dock. As the bartender will happily tell you, the image of the dock is a "trompe l'oeil" ... a trick of the eye ... that makes the center feature of the picture follow you, wherever you stand in the room.

***
Maybe it was the setting, or maybe it was the company, but the old world hotel framed some great conversations over the course of the week. At one point, I found myself talking with a young woman who was an impressively responsible diabetic.

By "responsible" I mean that every couple minutes, she pulled out an iPod-like monitoring device to input how many calories she'd sipped down. The device would then calculate her needed insulin dose, and push it straight into her bloodstream through a tiny port on her skin.

With my own experience in ports, I couldn’t help but ask about hers. From there, the conversation naturally moved on to larger, more sobering anecdotes of personal health. I told her a few of mine, and she told me a few of hers.

Because of an unfortunate family heritage of cancer, as well as her own closely monitored health, she'd been genetically tested several years ago and discovered that she had all the markers for a future date with breast cancer. The personal tragedy would be inevitable, as would the ripple of impact through her family and friends.

And so, as a mother of two, she took action. She chose the path of short-term hardship over the tragedy living just over the horizon. She had a “radical masectomy.” 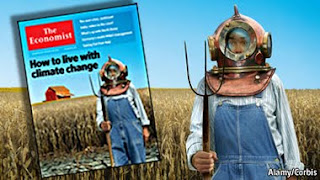 Earlier in the week, I’d been greeted at my mailbox by the new issue of the Economist. Trust me, having a subscription to the mag is a lot less intellectually formidable than it sounds. The writing is straightforward. The articles are pretty short. And even though it comes out every week, I can usually make time to read one or two of the articles during bathroom breaks.

One of the things I enjoy about the magazine is the political neutrality of it. It calls itself a "newspaper" and it focuses for the most part on facts, not philosophies. It's also published by Brits, providing a welcome perspective on our increasingly dysfunctional American political system. The cover story of this issue, however, practically made me vomit.

Apparently, acceptance of climate change has become the new green. Congress is doing it. Bill McKibbon is doing it. Yvon Choinard is doing it. And so is the NY Times.

We've chosen the path of long-term tragedy over of short-term hardship, of doing nothing versus doing something, and of putting off sacrifice until the day after tomorrow.

What a kick in the nuts. 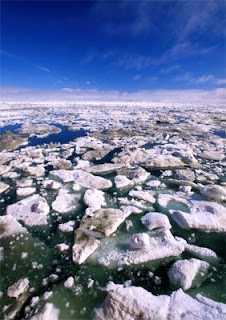 The good folks at Quark Expeditions are giving away a trip to the North Pole on a Russian icebreaker to any blogger who can whip up the winds of web traffic and get it to blow real, real hard .

They call the $54k adventure a “trip of a lifetime." Understatement alert.

Unless things change, unless some egos can be throttled back a few gears, unless some obvious responsibility can be embraced by leaders, by governments, by groups and by individuals … it’ll be one of the last trips ever to see a snow-covered North Pole. 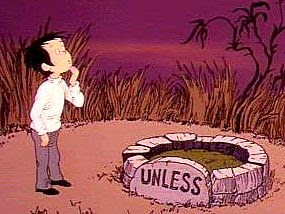 Whoever goes – whether it's me, you, or somebody much more deserving – it would be worthwhile to have them partner up with a young girl or boy on the adventure. Someone who’s not just punching a bucket list or using it to fluff their own web career. Someone who's innocent enough to talk some sense into our leaders. Someone who can help put a face on the tragedy that we have been tested for and that we know that is coming.

And if not, maybe they’ll just be a witness. One of the last remaining humans to actually be there, back in the day, when snow covered the poles.

Their tales will seem like the stuff of legends, most likely, like the grainy black and white photography filling the grand hallways of an old world hotel.
Posted by Drew at 9:55 PM 1 comment: