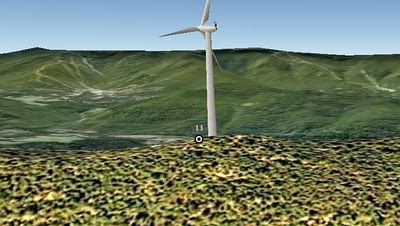 A tip of the hat to Vermonters for a Clean Environment for sending this over .... it's a purely hypothetical graphic display of what a 20 tower windfarm would look like on the Northfield Ridge, using Google Earth. I grabbed these screen shots as a way to get them up on the site.

According to VCE, this "speculative" simulation is based on 3MW turbines. That's the same size proposed for Lowell by Green Mountain Power. Although it doesn't show the full visual impact, it allegedly provides a good sense of distance between the turbines as well as a pretty accurate size representation.

To view the photos at full size, just double click on them. And if anyone would like the Google Earth file for this tour, so you can check it out yourself, email me at wickedoutdoorsyATgmail.com. 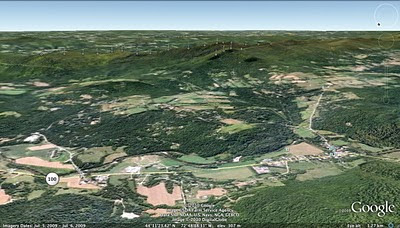 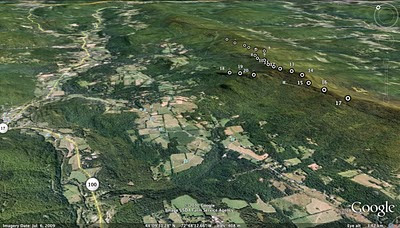 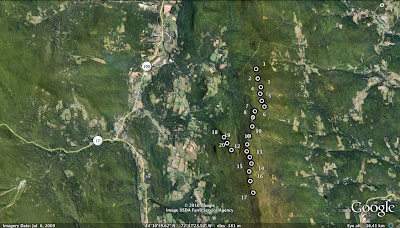 Email ThisBlogThis!Share to TwitterShare to FacebookShare to Pinterest
Labels: Yo-Yo

Will the Northfield Wind Project feature a Turbo Encapsulator?

Wind Power in my backyard: Enter the IMBY? 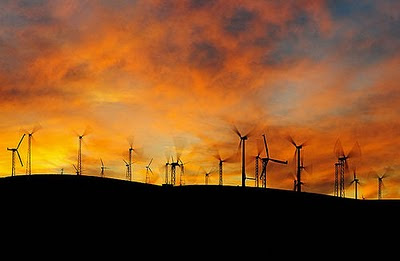 The short story is that a group called Citizen's Energy is eyeballing the Northfield Ridge for a commercial wind farm. That's the eastern border of the Mad River Valley, for those of you scoring at home, and it's currently undeveloped and prohibited from development on the top 1000 feet or so. It's the sunrise ridge of the valley, and from my house it looks like a spectacular, verdant wilderness. 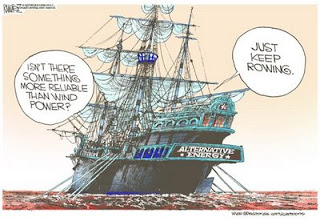 There've been no official plans released. No schematics or vision statements. Just an official comment that it seems unofficially like a good spot for a farm between 12 and 18 turbines. Maybe 1 megawatt per tower, maybe 3. Maybe 150 feet tall. Maybe 450. We'll know more on May 18 when program spokesperson Randy Male (great name, or greatest name ever?) attends the next local Planning Commission meeting ... a board that I'm currently sitting on.

Speaking as a former newspaper hack, I can vouch for the fact that this is exactly the type of story that brings out the pitchforks and torches from the locals. It moves papers off the rack. It's the mother lode of letters to the editor. And it gets people talking. 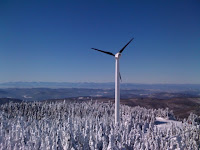 >It was news to me that Vermont Towns, ironically, have extremely limited power when it comes to regulating power. If it's going to the grid, then it's the State's Public Service Board (PSB) that makes the call. They don't have to warn you, they don't have to solicit public comment, they just have to read the local Town Plan and "take it under advisement."

Coincidence of coincidences? We're finishing up the new Town Plan right now, as it expires on June 27, 2010. And one of the last chapters to be done is the one on Energy.

And while our contracted planning consultant told me a few weeks ago that she thought our current Town Plan is "anti-wind," a quick survey of friends and neighbors is that the strongest opinions I've heard so far are for a wind project, not against it.

A few quotes from a local email chain drive it home better than I ever could: 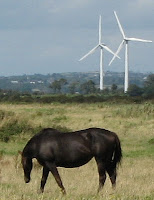 ... "The notion that pristine, shiny, new solar panels and wind turbines mar the elegant vista of our landscape is a funny concept. Somehow, the dilapidated structures, auto salvage yards, and miscellaneous crap laying around various properties in the Valley are not an aesthetic issue. No one seems to be concerned that the Skatium, right next door to my business location, has left (for dead) a giant heap of dead refrigerating tubes on the marshland in plain view. And how about the ski trails? We can define them as “beautiful” because we want them, but they are in no way natural or original to our landscape. They present as an almost volcanic flow of whiteness."

... "Why are (renewable energy sources) not just as much a part of a working farm as a tractor or a barn? They’re just another part of the “plant”. What separates the panels from any other part of the operation? A shiny orange Kubota tractor doesn’t exactly scream old-world Vermont, but we embrace it. What makes (renewable energy sources) different than a chimney billowing wood smoke in winter? Nostalgia is not a valid answer."

.... "I fully agree that if we want to get off fossil fuels and nuclear power we should share the impact and if that is visual so be it. Personally I would love to see wind turbines cranking out the juice and knowing where my electricity comes from. Imagine if the current oil spill were a nuclear accident." 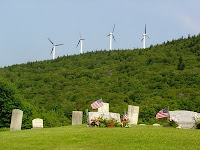 
The wind project as well as other local issues relating to Energy will be discussed at the May 18 Waitsfield Planning Commission meeting. We're expecting a decent crowd, so we're looking for a larger venue and will publicize that as soon as we pin it down. 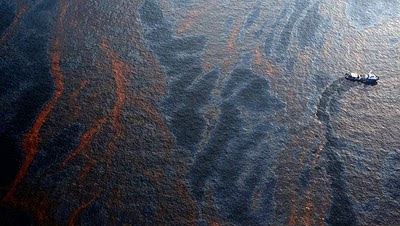 9. We promise we’ll get around to it by Labor Day.

6. Louisiana hasn’t had a disaster in 5 years.

5. Guy from Goldman Sachs said it would make money.

3. Did you hear Ricky Martin’s gay?

1. Honestly, we’re so reckless—surprised it took this long