Hurricane Irene: It's not over until she says it's over 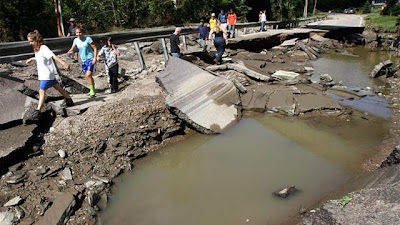 The big kicker for me was hearing that the Alchemist would not re-open (LINK).

Unarguably the most successful, always-crowded, always-happening brew pub in arms reach of the Irene flood zone, the Alchemist was hit hard. An iconic establishment on an extremely high-visibility corner, the Alchemist was also a beacon of inspiration in the aftermath of the flood, posting huge “We WILL be back” and "God Bless Waterbury" signs in their window behind an even bigger Dumpster full of soggy drywall and limp insulation. (... A wonderful photo gallery of the damage and recovery efforts at the Alchemist can be found HERE).

A few weeks ago, the owners learned that their basement – home to their offices, their food storage and their on-site brewing facility -- would not be covered by their insurance. So, they made the tough to call to shut things down and move on.

Of course, you can’t blame them. But you can wonder about what’s going on in the less thriving establishments who were also thrashed and impacted by Irene. It's not advanced math. You start with a business that wasn't exactly crushing it anyway, add one part natural disaster, and stir.

There are a few unofficial stats floating around, though. According to one friend involved in regional repair efforts, we have built back only about 25% of the homes and businesses that were destroyed or damaged. Some, like the Alchemist, will clearly be replaced by another business. But many on the bubble will likely never get rebuilt at all.

It’s a tough thing to wrap your head around sometimes, as a few hundred feet can separate a complete trashed and destroyed property from a healthy and vibrant one. Under a blanket of fresh snow, you could easily drive from Burlington to Sugarbush and not notice any damage at all.

For the local businesses, heading into the critical winter tourism season that drives the engine around these parts, it’s a tough message that people are trying to get out there. How do you express the severity of the situation, and the fragility of the business community, while also giving people the confidence that those same businesses are open and ready for business?

Small Vermont towns don't do the national franchise thing. The state capitol is the only one in the nation without a McDonald's. There aren't any Starbucks around here, nor is there a J Crew or an Eddie Bauer that can pay rent through years of economic distress. The restaurants and merchants are almost exclusively one-of-a-kind, purely original enterprises. And they stay afloat almost solely through the support that walks in the front door.

... and now the part where I post a ski flick preview of "Downhill Racer" 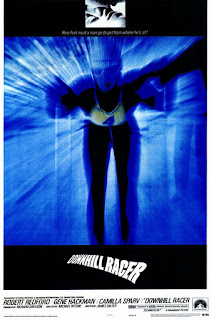 Not currently playing in any theater that I'm aware of, but it still fits the theme of the month.

If you dig this at all, you should pick up the current issue of POWDER, which has a phenomenal retrospective on "Spider" Sabich, the inspiration for Robert Redford's character in the film.
Posted by Drew at 3:48 PM No comments: