They say you’re not really trying unless you’re falling down.   So I must be trying really hard.

I’ve fallen out of canoes, over handlebars, off chairlifts.  I’ve crashed into lift poles, sailing masts and housefronts.

I’ve tumbled a few feet, going ass over knobby tire into cactus-filled creek beds.  I’ve swam a few dozen yards in a thundering swirl of slabby snow.   And on one notable occasion, I’ve tomahawked several hundred meters down an icy northern face that sure looked a lot kinder and gentler before I dropped in.   Just ask around.   This is the short list.

I’m not proud of my outdoor mistakes.  But I’m not embarrassed either.   They’ve all been educational … or maybe “correctional” is a better word …  leaving marks both mild and occasionally quite deep. 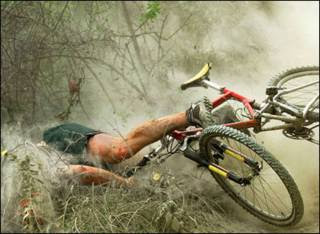 It can be a sober thought to admit you’re on your own, that your actions are what got you here, and that whatever comes next is exactly what you deserve.

Some people figure it out early.   Some, like me, are definite latecomers.   And some, unfortunately, don’t even know that the party is going on at all.

With a home full of kids these days, the idea of teaching independence is a thought that’s come up quite a bit lately.   There’s zero doubt in my mind that my kids want it, crave it, and need it.   But is it teachable at all?  Isn’t cultivating independence the same as growing a weed in a flower garden, or raising a coyote with milk?

Increasingly, I’m convinced that the only real path to independence is on that actual trail into the woods outside the back door.   Take a few steps together, enjoy a few successes, endure a few challenges, and then let them take the first fork by themselves.  The rest is up to them.

Personally, I wasn’t raised in a household of transceivers and backcountry first-aid kits. The teaching mistakes I made as a kid were addressed with time outs and two-stroke penalties.   As much as I appreciate my upbringing and still enjoy those games today, I’ve never wondered how I’m going to make it home alive from the 18th green.

As a dad, I definitely don’t want my kids to make the same mistakes I’ve made.

I want them to make their own.


Hat tip:   Videos here were found on in Adventure Journal's "Moments of Regret"