Thirty-six years old. Born in northern Vermont and for the most part, stayed there. 34 of 36 winters taking what came and (mostly) not complaining.

And now. Gone. Eight weeks in a 3/4-ton Dodge van, rear seat ripped out and replaced with a sheet of plywood and a piece of foam. A bed, of sorts. The van hung with all manner of warm-weather play: Two kayaks, three bicycles, a tricycle for the littlest. The bags packed with swim suits and sandals and sunblock. The map on the dash traced with a line extending from Cabot to the Florida Keys.

Christmas spent in a deserted campground in the Ocala National Forest. The boys get leather belts with their names embossed, a book each, and a maple candy. And one of those little planes that fly with a rubber band. They are ecstatic.

After presents, kayaking. Otters and turtles and egrets and funny fish with long snouts that look like they might bite. For dinner, chicken cooked over a fire. It’s good.

No skiing, no pre-dawn mornings spent leaning into a thawing hole of vision on the windshield, coffee sloshing onto Gore-texed thighs. It’s a strange shift and the adjustment has demanded some discipline, learning to enjoy this different world and not dwell on the storms left behind.

And the larger lesson: At some point in your life, if you are lucky, you feel connected to a place and a place’s people. Does it choose you, or do you choose it? He does not know, but he is grateful to feel that connection, even as prepares to point the big Dodge southward, into the heat of winter.
Posted by ben at 10:00 AM 2 comments:

Have a Wicked Christmas 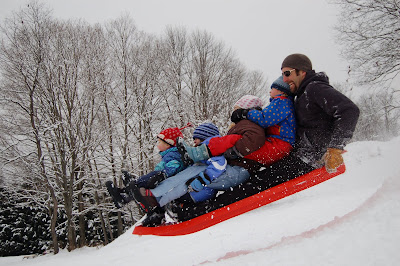 Can you smell the green wax?

The stain of greenwashing isn't what you think 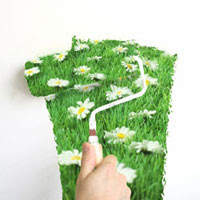 Excerpted from a guest editorial in the Outdoor Retailer Daily pre-show issue:

...Greenwashing, the vogue term for environmental hypocrisy, is a divisive label that goes beyond a call for truth in advertising with the zeal of a mob. Light beer still makes you fat, extra strength medicine still leaves you coughing, but a greenwasher is tarred and feathered and escorted to the edge of town.

Not just a label anymore, greenwashing is emerging as a wedge issue within a product community that slows progress in its tracks. It creates arguments and uncertainty, casting shadows over things like organic cotton for being easy to counterfeit or bamboo for being energy intensive to grow.

Fueled by cynicism instead of sincerity, the greenwashing virus reaches its zenith when it stops a brand from doing anything at all.... 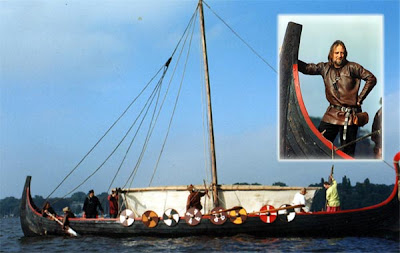 Our favorite almost-Vikings, Brian and Emily, will host "Wild People, Wild Places: Sailing and Skiing in Iceland" next Wednesday at the Big Picture in Waitsfield.

Please check your battle axe at the door.

LINK: Sailing & Skiing in Iceland
Posted by Drew at 9:08 AM No comments: 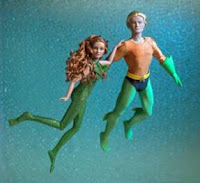 If he did, chances are, he'd probably want some of these.

I swam competitively through high school. Great workouts for sure, but spending a couple hours a day with my head underwater didn't exactly hone my social skills. and neither did getting a Blondie tune stuck in my head for a couple thousand meters. 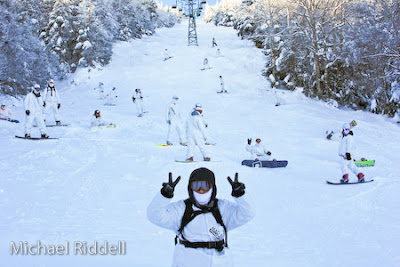 The "Glad River Men" hiked, rode, were greeted by applause from the skiers at the base, and (rumor has it) .... went inside and ordered three dozen servings of poached eggs for breakfast.

Taos announces that they will allow snowboarders beginning on March 19, 2008.

Feels like the first time: Taos says 'yes' to snowboarders

Snowboarders will get their first shot at Taos beginning on March 19, 2008.

The new commodity is us 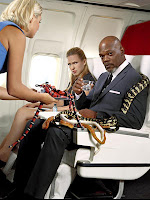 Like many of us, I travel for business. I sit in a tiny airplane chair, my knees snug to the kidneys of the person in front of me, my hair comfortably resting in the saliva-covered hands of the toddler behind me. And I relax.

Sometimes, others around me are not so comfortable. So they assert their First Amendment rights by complaining as loudly as they can, apparently hoping to rouse a Sky Marshall or Idaho Senator from the bathroom for assistance. This behavior is odd to me, because I naturally assume that, like me, my fellow passengers spent the least amount of money possible on their airfare.

The sales meeting euphemism for it is “downward price pressure.” Say it out loud, and it sounds like the air coming out of a tire. In reality, it’s not much different, because at this point if you’re not already at the bottom of your pricing comfort level, you’re probably close enough to see it.

Flying the not-so-friendly-anymore skies, we all get a chance to feel what it’s like to be a commodity, an item valued for price alone, and we’ve started to realize how much it sucks. Consumer respect for the products put in front them can’t sink much lower.

Unless, of course, things change.
Posted by Drew at 8:32 AM 1 comment: 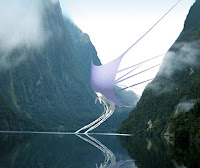 Is it a beautiful solution for windpower generation that doesn't involve windmills on exposed ridgelines?

Or it is the fantasy of a bunch of geeky engineers with a Thong Obsession? 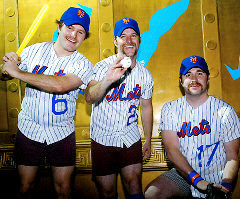 "No one said it would be easy growing a mustache for a month, but 2,178 brave men did so as part of a campaign called Movember. Together, they raised more than $650,000 in the United States to help support the battle against prostate cancer."

Ride it if you can, Redux 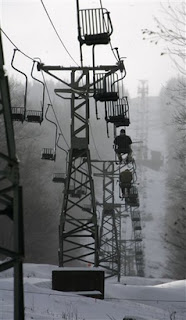 The first time I ever snowboarded at Mad River Glen was in the early 1990s, after a ripping December noreaster clobbered the mountain with snow. We boot packed up through a couple feet of fresh, making brutally slow time but enjoying the way up and making sure to be very, very safe along the way. We didn't start until after lunch, and at that time of year, the Green Mountains get dark at about the same time the kids get out of school, so by the time we hit our stride at the Single Chair midstation it was twilight.

We stopped and rapped with a number of skiers there. We talked snow and we talked turns and we all smiled. We might have even shared some holiday cheer. I can't remember.

The fact that Mad River Glen doesn't allow boarders on the chairlift was hardly a reflection of the attitude of the skiers on the mountain that day. Anybody willing to hike up seemed welcome, whether they were on boards or skis or pogo sticks or scuba flippers. Since then, I've hiked and boarded MRG a number of times either pre- or post-season. And I've enjoyed the experience every time.

I finally moved to Vermont a few years ago, and at the time I used to get my own panties in a bunch about the lack of "legal" riding at MRG. And then, I got over it. If it were a clear cut violation of National Forest regulations as some argue, (See the comment on "Sabotage Stupidity below) I just assume that one of Burton's eight hundred lawyers would've figured that out by now and things would've changed. My guess is that it isn't so simple.

So I never bought a coop share, and I spend most of my days at Sugarbush ... a damn fine mountain in it's own right. And one that welcomes riders with open arms.

The irony is that if the conflict between Burton and MRG was ever resolved, it would diminish them both. As it stands now, MRG continues to get an international boost to their marketing program (courtesty of Jake), while Burton gets to re-establish their street cred as the brand that's fighting for Joe Rider.

Don't get me wrong: I do enjoy the terrain at MRG, I like the company of the people that ski there, and I'd love to ride MRG on a big dump Wednesday in February. But I've got my options .... like skiing ... and apparently, they've got their reasons. 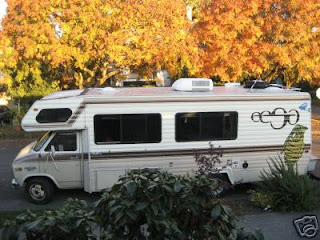 Put it on the Howard tab 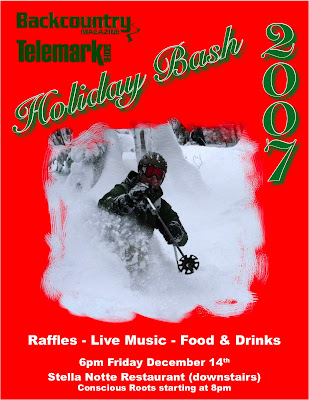 Right across the road from the main entrance to Smuggs.
Posted by Drew at 2:34 PM No comments:

Resume of the Day

Not sure whether to be very impressed or very scared ...
Posted by Drew at 1:33 PM No comments:

Only 10 hours to go in the annual Northern Forest Canoe Trail online auction (LINK).
Posted by Drew at 11:30 AM No comments:

You go your way, I'll go mine 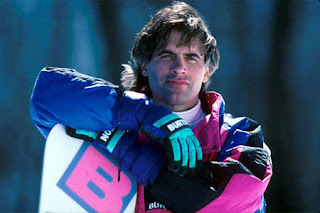 
Monday lunch at MRG
Posted by Drew at 5:08 PM No comments:

How to sabotage "Sabotage Stupidity" 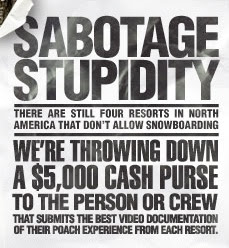 Burton Snowboards, a multi-national privately owned corporation with an estimated $500 million in annual sales and offices on three continents, is offering a $5000 cash purse for the best video documentary of poaching little old Mad River Glen on a snowboard. Not that they've asked for our opinion, but a few suggested responses for Mad River Glen include:

* ...Offering a $10 cash purse (for gas back to Burlington) for best video documentary of a would-be poacher trying to find a parking space at MRG on a Saturday.

* ...Offering a $20 cash purse for best video documentary of a Burton marketing executive explaining why a campaign encouraging the interruption of a legit ... if totally quirky and random ... Vermont-owned business was really the highest priority branding campsign they could come up with for winter 2008.

* ...Offering a $50 cash purse for best video documentary of slapping a "Ski It If You Can" sticker on the front door of the Burton offices.

* ...Offering a $100 cash purse to MRG shareholders for the best documentary of poaching Mad River Glen on a snowboard, winning the overall prize from Burton, then putting the cash purse toward the Single Chair Fund.